Arnold Lockshin, a political exile, forced out of the US by the US secret political police.

A free pdf copy is available, via the following link:

Silent Terror: One family’s history of political persecution in the United States 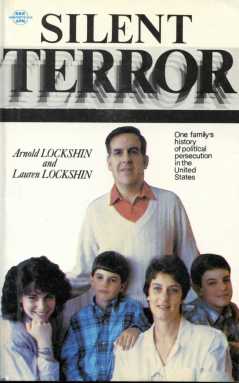 “Psychological warfare is an FBI-CIA weapon directed not only against progressive individuals, but most importantly in the U.S., to suppress formation of powerful people’s movements of mass struggle. “Silent terror” unfolds the theory and practices of psychological warfare against this family and other Americans.”

“The FBI itself played a major role fueling the anti-communist hysteria of the 1950s.  ‘The thousands upon thousands of FBI victims never knew where the blow that felled them came from, bringing some an untimely death from mental stress of suicide.  Who to complain to, and against whom?'[15]”  -Silent Terror

Has our book been suppressed and censored in the United States?

“Silent Terror” was first published in 1988, but the book has never been published or distributed in the United States.  It has been very difficult for the average person to even know of the book’s existence.  Now readers have a genuine opportunity to become acquainted with our book, here:

Silent Terror: One family’s history of political persecution in the United States

The persecution remains in force, as my Social Security benefits continue to be withheld.  To date, I have received no response to my repeated inquiries:

My letter to Barack Obama

“Also on our minds are others in the United States who are under hidden attack.  We are with them in spirit and hope that our story, if it reaches them, may help overcome the FBI’s treachery.  We feel deeply about these matters.  We will continue to speak out for what we believe is right.”

-Arnold and Lauren Lockshin, political exiles from the U.S. living in Mosc0w

Psychological warfare has been employed by the U.S. government for many decades.  It was used against the Lockshin family (and many others in the U.S.), in the 1970s, ’80s and onward.  And it is still being used today.

Visit our partner site for a history of the Lockshins in the Soviet Union:

Please click on the the black cube on the left-hand side of your screen to view other information provided on this site, as well as a searchable pdf version of “Silent Terror” which can be downloaded.  We are working on other formats, as well, including an e-book.  Please let us know if you encounter any problems.